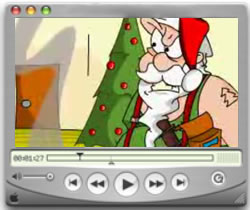 Down in the workshop all the elves were making toys
For the good Gentile girls and the good Gentile boys
When the boss busted in, nearly scared them half to death
Had a rifle in his hands and cheap whiskey on his breath
From his beard to his boots he was covered with ammo
Like a big fat drunk disgruntled Yuletide Rambo
And he smiled as he said with a twinkle in his eye,
“Merry Christmas to all – now you are all gonna die!”

The night Santa went crazy
The night St. Nick went insane
Realized he’d been gettin’ a raw deal
Something finally must have snapped in his brain

Well, the workshop is gone now, he decided to bomb it
Everywhere you will find pieces of Cupid and Comet
And he tied up his helpers and he held the elves hostage
And he ground up poor Rudolph into reindeer sausage
He got Dancer and Prancer with an old German Luger
And he slashed up Dasher just like Freddy Krueger
And he picked up a flamethrower and he barbequed Blitzen
And he took a big bite and said, “It tastes just like chicken!”

There’s the National Guard and the F.B.I.
There’s a van from the Eyewitness News
And helicopters circling around in the sky
And the bullets are flyin’, the body count’s rising
And everyone’s dying to know, oh Santa, why?
My my my my my my
You used to be such a jolly guy

Yes, Virginia, now Santa’s doing time
In a federal prison for his infamous crime
Hey, little friend, now don’t you cry no more tears
He’ll be out with good behavior in 700 more years
But now Vixen’s in therapy and Donner’s still nervous
And the elves all got jobs working for the postal service
And they say Mrs. Clause, she’s on the phone every night
With her lawyer negotiating the movie rights

They’re talking bout – the night Santa went crazy
The night St. Nicholas flipped
Broke his back for some milk and cookies
Sounds to me like he was tired of gettin’ gypped